Recently, my son’s cat went missing. Dmitri is my favorite of Joe’s cats, a skinny, friendly little guy who I bonded with during my occasional cat-feeding duties. Dmitri is the cat that will nuzzle your face and pay attention to you beyond his desire to be fed. So when Joe called one Sunday night in October to say that Dmitri had gotten loose and not returned home, I promised to help in any way I could.

Joe emailed me a Lost Cat poster with a picture of Dmitri. I went to Staples and printed out about 50 copies. We met  at Joe’s house and walked methodically around his neighborhood with a staple gun, and put the poster on every telephone pole for several blocks in all directions. A few neighbors who saw us at work with the staple gun commiserated and said they’d keep their eyes open and call if Dmitri turned up in their yard. Several people pointed out where homeowners were known to feed stray cats, and suggested we look around their yards.

At one point a car pulled up and two young women said they were certain that Dmitri had been meowing loudly on their back porch the night before, but when they went outside, he ran away. The good news was that they lived only two streets away from Joe’s house. Well, we reasoned, Dmitri was sweet, but he wasn’t the brightest bulb. He could get lost that close to home. But at least there was hope he was still nearby.

Joe had to go to work so I continued stapling posters until all of them were up. As I was finishing stapling the remaining posters, I spoke with a nurse coming home from a night shift, a man raking leaves, a young woman getting high in her car, and one of the homeowners who fed stray cats. All were concerned and promised to keep their eyes open for Dmitri. It was hard to believe that people who don’t know Joe, or his lost cat, ungrudgingly spent 10 minutes outside in the cold talking to us about this small personal tragedy, rather than running inside to get warm.

For two more nights Dmitri was out on the street somewhere. The temperatures plunged into the 30s and it was windy and damp. I had trouble sleeping, thinking about Dmitri being cold and wet, hungry, and scared, or worse. Joe said, “I hope if something terrible happens, it happens quickly and he doesn’t suffer.”

In the late afternoon on the sixth day after Dmitri went missing, a man called Joe to say he thought Dmitri was in his yard hiding under a tarp. A short time later, Joe got Dmitri –lost only two blocks away from home. He was skinnier, dirtier, and hungry, but seemed OK.

The next day I went back to Joe’s neighborhood and took down all the lost cat posters so people would stop worrying about Dmitri. A number of people who saw me pulling them down asked if I’d found the cat, and seemed genuinely happy to hear we had.

The whole series of events around Dmitri getting lost, and then found, were a rare occurrence in my life these days–an arc of events that from inception of the problem to its resolution took less than a week to play out. Problem identified, steps taken to address the problem, problem resolved. I can’t think of any other problem or challenge facing me over the last 5 or 6 years that has had such a satisfyingly brief resolution, and it isn’t because the problem of a lost cat may not be on the scale of other things I worry about. For weeks after the Lost Cat arc was completed, I kept thinking about it. I realized just how much I hungered for an arc that resolved so cleanly and happily in any other part of my life. An arc in which my efforts could actually have a positive effect. A problem that posters, staple guns, and telephones could solve. 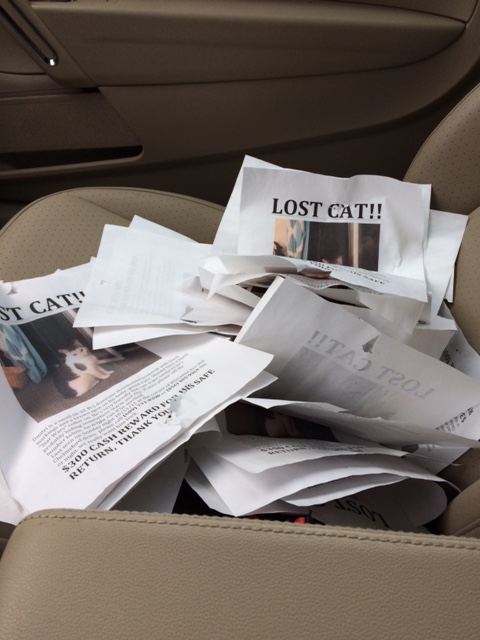 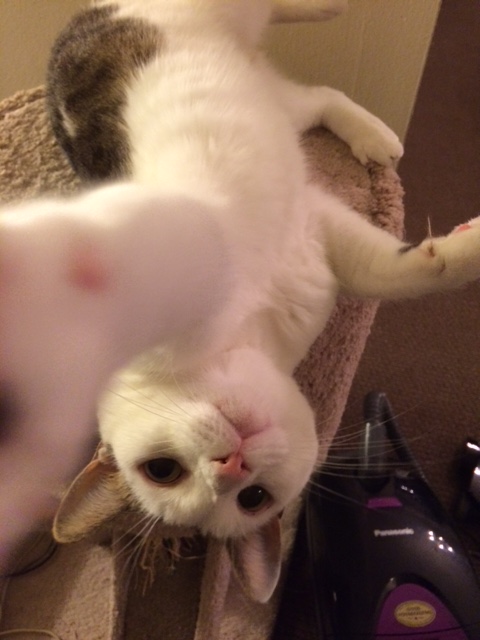 8 thoughts on “Cat, Lost and Found”